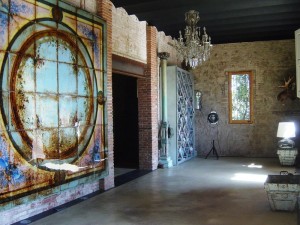 Dating back to its construction in full S. XIX, architecturally was influenced by French Neoclassicism, finding in his reminiscences modernist lines. It has been declared historical and artistic heritage of the city of Barcelona. This unique building was commissioned by the wife of a wealthy businessman of the time who, having made his fortune in Cuba, decided to return to his homeland to take up residence in Barcelona final.

The Mansion of Barcelona is the work of Jaume Gustà Bondia, renowned Gothic influences modernist architect who was master builder since 1872 and received his degree in architecture at the newly founded School of Architecture of Barcelona in 1879, a year after Antonio Gaudi with whom he had personal and professional relationship. Throughout his career as a municipal architect of Barcelona received important public commissions, such as the Palace of Industry International Exhibition of 1888, the city of Sants and its cemetery, violet and headquarters Gràcia Sants district, among others.

During the period between 1997 and 2007, the mansion was a prestigious hotel. Internationally renowned figures and members of European royalty have been enjoying the majestic charm of the Mansion of Barcelona and its unique environment.

Throughout its history, the Mansion of Barcelona has been the scene of the finest celebrations and by the Spanish aristocracy and bourgeoisie. It has held exclusive events of all kinds, from weddings and filming commercials to company presentations and products as the launching of the latest Porsche model range among others.

They have written numerous articles in prestigious journals today and has served as the backdrop for film shoots as Savage Grace, a 2007 production starring Julianne Moore and directed by Tom Kalin.

The current owners purchased this architectural gem in 2007, subjecting it to a thorough restoration that has been enhancing the original values ​​as emblematic building in grand style combining historical romance innovative architecture with modern conveniences.